They've been reporting a lot of great butterflies lately in southeastern Arizona but I'm holding off going out there till the Chiricahua Whites are out.  So I decided to just make a run out to west Texas instead and it paid off with three lifers.  All of the following were seen along TX 188 just below the McDonald Observatory or along its entrance road.

Recent summer rain was evident as there was a little green along TX 118 as I left Fort Davis and as I climber toward the McDonald Observatory I started to see a few flowers.  I stopped at one patch and almost ran over a Northern Cloudywing.  There were a half dozen in the area. 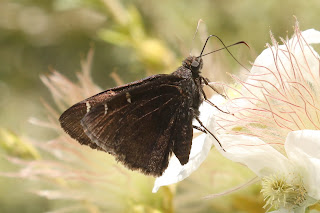 Then a tiny skipper landed just in front of me and I could see a yellowish head.  I first thought of Golden-headed Scallopwing but it flew and landed again and I could see it was one of my most wanted butterflies, Orange-headed Roadside-Skipper.  I later found a second. 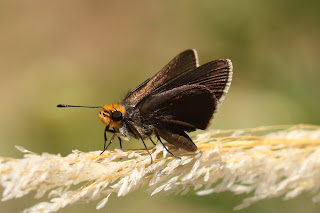 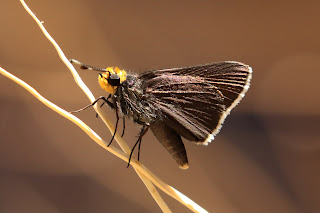 Wow that was nice!  As I watched Northern Cloudywings in a white blooming bush, I noticed a couple of small skippers.  One was a Common Sootywing.  I took lots of photos hoping it ws a Mexican Sootywing but it wasn't. 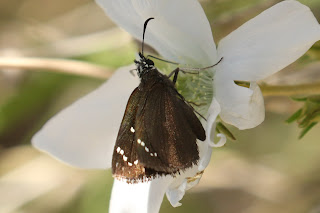 The other was a Cassus Skipper, a butterfly I've only seen a couple of times. 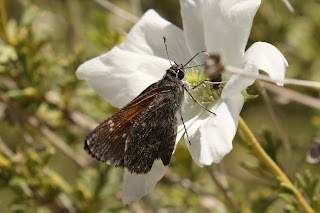 A paler more grizzled skipper landed on the rockface and I guess it was a Bronze Roadside-Skipper.  I've seen that one before also.

Then I saw one more tiny skipper and I fired away and was lucky to get this poor image of my lifer Dotted Roadside-Skipper. 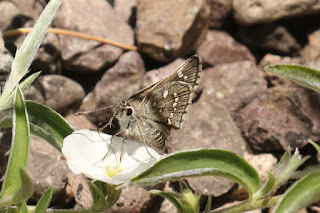 I scrambled around on the rocky hillside and saw little.  So I made my way along the highway back to my car and saw a hairstreak on a tiny milkweed that was growing on the edge of the pavement.  It was odd colored, more greenish than the common Gray Hairstreaks I had seen earlier.  This was a new one for me.  I was hoping it was a rare Poling's Hairstreak.  It was more brightly colored than the dingy specimen in Glassberg's book but the markings were right. 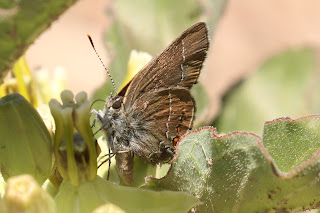 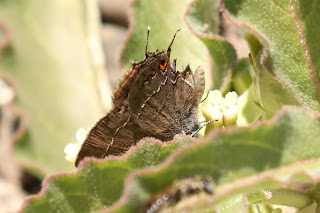 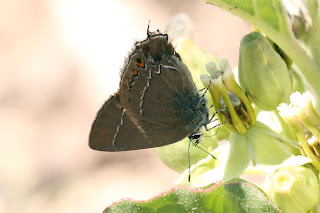 A bit later I found a second on another milkweed. 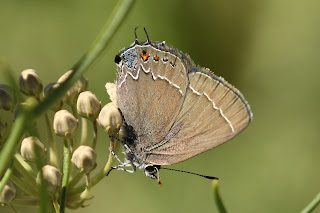 And then there was a Juniper Hairstreak on the same plant.  It seems to be pretty much like the Siva subspecies though the subterminal band on the hind wing is a little wavy. 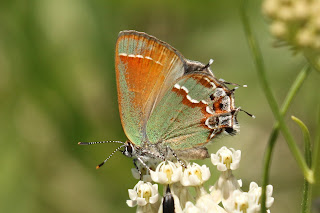 Driving up the park road toward the telescopes I saw a few flowers near the water tanks.  One held four Poling's Hairstreaks.  According to Glassber's book they should be gone by now. 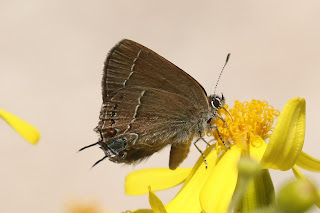 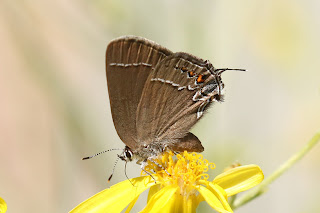 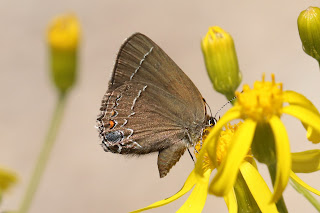 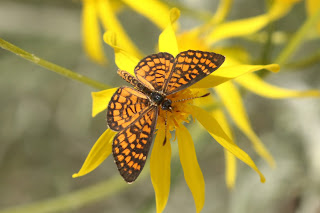 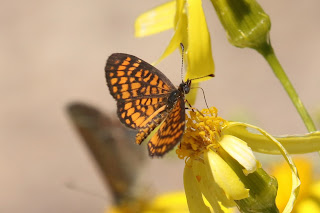 Walking around the area I found a Marine Blue. 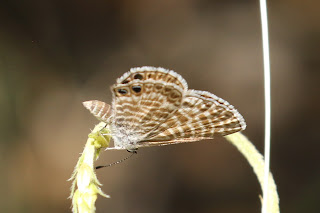 And a couple more Poling's Hairstreaks. 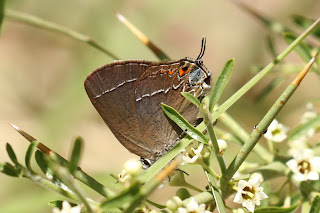 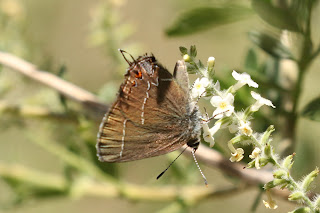 I then ran up the the Lawrence E Wood picnic area but didn't see anything different.  It was getting late to I decided to overnight in Alpine.  My plan ws to go to Big Bend but with the daytime high predicted to be 110, I just headed for home with three lifers including an amazing ten Poling's Hairstreaks.  Good enough.